Local to Run for Governor of Colorado 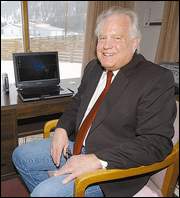 Summit County’s hometown politician Gary Lindstrom will run for Governor of Colorado in 2006.

The 31-year local resident and former county commissioner who currently represents Summit, Eagle and Lake counties in the State House of Representatives, decided recently to make a bid for the Democratic nomination to fill the gubernatorial seat.

Lindstrom, 63, who stands on a 45-year career in government, said he will run for governor as a politician who isn’t afraid to speak the truth. That truth, from his perspective, is that the state of Colorado does not have a vision: its politicians merely are “reactive” to the main problem facing the state — growth.

“We have a five-bedroom house and we’re inviting 20 people to stay. We’re marketing something that’s over capacity,” he said. “You can tell people to try to stand up in the kitchen to sleep, but that’s not going to work.”

Lindstrom spent his freshman term in the State Capitol this year, where he said he realized too many good people are motivated but afraid to tell the truth, afraid to speak their minds about the state of Colorado.

“Many of them position themselves for a greater political office and think they may hurt their position,” he said, naming a recent example of multi-million dollar computer systems that are malfunctioning for the state.

“No one is willing to take on the governor’s office and say, ‘You made a mistake,’” he said. “Instead, (law makers) keep approving more money every time to appease the contractors.”

It’s things like that, plus more important state challenges, that Lindstrom said he wants to address.

“The state highways are a disaster. But everybody’s afraid to confront (director) Tom Norton and the Colorado Department of Transportation,” he said. “... there’s a fear of the governor’s office ... It’s terrible.”

Lindstrom said that before the state grows more, infrastructure needs to be fixed. He listed roads and water as top priorities. Less talk, more action.

While Gov. Bill Owens formed roundtables in each basin to address water resources, Lindstrom said that results in a bunch of talk and no action.

“Someone has to be assertive instead of more talking,” he said. “Nobody’s got the backbone to stand up and say, ‘We’ve got to take care of the infrastructure.’”
Posted by Nancy Yearout at 4:52 PM