Vail Resorts chairman and CEO Adam Aron announced Monday that he’ll be stepping down from the top job at the company. Vail Resorts owns both the Breckenridge and Keystone ski areas.

Aron will resign effective June 28, according to a company press release. The date coincides with Aron’s 10th anniversary working for Vail Resorts.

“I think I’m so proud of what we’ve done, I’m going to go out a winner,” Aron said in an interview Monday. The 51-year-old Aron stopped short of calling the step a “retirement,” adding, “I’m sure that there are some very exciting things in my future left to do.”

Over his 10-year stint at Vail Resorts, the company grew to four times its original size. In the release announcing his resignation, Aron said, “I am enormously proud of the progress that has been made. In its simplest terms, I have had a great run.”

Aron’s self-described great run is ending just as a number of high- profile, high-yield projects by Vail Resorts are either under way or nearing completion. The company’s Arrabelle at Vail Square project is the jeweled centerpiece of the current expansion. When finished in 2007, the Arrabelle will contain 67 condos and a 36-room luxury hotel. The project is valued at more than $110 million. Vail Resorts is also finishing the Gore Creek Place townhome project — a $50 million endeavor with 16 four- and five-bedroom condos, as well as the expansive “Front Door” redevelopment project and a total redesign of the ski area’s Lionshead gondola area.

Aron, though, also reflected fondly on the progress made at the two Summit County ski resorts the company operates — Breckenridge and Keystone. He particularly noted a decade of progress making Breckenridge “the world class ski resort that the town deserves.”
Posted by Nancy Yearout at 12:33 PM No comments:

This is the first time in the event's history Team Breckenridge has taken the Gold Medal.

Team Switzerland won the silver medal with their sculpture "Somersault" a graceful round shape balancing on a pedistal.

Team Germany's "Coming Home" won the bronze with one of the more thought-provoking sculptures of two lovers enveloped by the world.

Thousands of spectators watched this week as 13 teams from nine countries participated in the event, now in its 16th year.

The finished pieces are achieved without the use of power tools, internal support structures or colorants - just the ingenuity of man and a medium that lends itself, if only temporarily, to the persuasion of chisels, saws, chicken wire and even carrot scrapers.

With more snow and cool temperatures in the forecast, the sculptures should remain in display at the Riverwalk Center in Breckenridge until February 5 - weather permitting.
Posted by Nancy Yearout at 9:53 AM No comments: 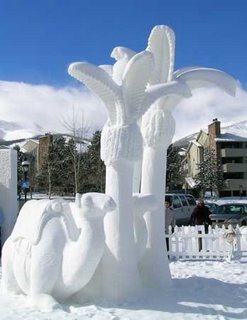 Long before it was an international competition, Breckenridge residents used piles snow and water to make their works of art. It began as an event at Ullr Fest with sculptures lining Main Street.

Local businesses created all sorts of sculptures up and down Main Street during the annual winter festival.

Team Breck captain Rob Neyland, who first entered the contest in 1979 with the staff at his real estate office, described the sculptures then as "spontaneous grassroots street art."

Neyland, Ron Shelton, Randy Amys and Bill Hazell won that year and Team Breck continued winning the local event. Soon enough they were exposed to the greater aspect of the sport - national and international competitions.

"When we found out people did this elsewhere, we knew that we had to make this happen for Breckenridge," Neyland said. "Breckenridge is a great big world of snow and it's the perfect blend of art and sport."

Neyland petitioned for state certification and in 1986 participated in (and won) the Colorado State Snow Sculpture Championships hosted by Breckenridge.


In 1991, with the help of the ski resort's specially made snow, the town hosted their first International Snow Sculpture Championships.
Posted by Nancy Yearout at 12:03 PM No comments: 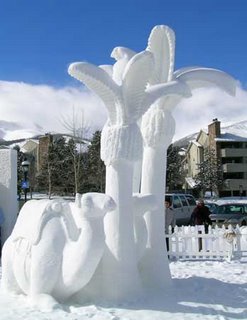 The Budweiser Select International Snow Sculpture Championships return to Breckenridge for the 16th year, January 24-29, 2006. This year, 13 teams from nine countries, including, Canada, France, Germany, Great Britain, Mexico, the Netherlands, Switzerland and the United States will participate in the competition. The event takes place at the Riverwalk Center, located in the heart of Breckenridge between Main Street and Park Avenue. This event is attended annually by over 30,000 people from across the U.S. and the world and has been named by USA Today as one of the top 10 ways to celebrate winter. The event begins at 11 a.m. on Tuesday with the Starbucks Shotgun Start. The complete Schedule is attached.

The Budweiser International Snow Sculpture Championships have long been known for bringing together diverse cultures. “Each year, the competition steps up to create even more amazing works of art than the previous year,” notes Sally Croker, Breckenridge Resort Chamber Event Director. “I believe the camaraderie between the teams during the competition contributes to that excellence.”

Each year, four-person teams are assigned 12-foot-tall, 20-ton blocks of machine-made snow. These teams work within a five-day period to create sensational sculptures. From these blocks of snow, the teams often create enormous pieces of whimsy, although some deliver powerful political or social commentary. Some sculptures are even interactive and allow spectators to experience the tactile as well as visual grace of the fleeting exhibit.

The finished pieces are achieved after a total of 65 intense hours of work without the use of power tools, internal support structures or colorants – just the ingenuity of man and a medium that lends itself, if only temporarily, to the persuasion of chisels, saws, chicken wire and even carrot scrapers.

When the sculptures are finished on Saturday, January 28, a panel of well-known artists and patrons of the arts serve as judges and present awards to the first, second and third place sculptures. Awards are also given for People’s Choice, Kids’ Choice and Artists’ Choice. There are no cash prizes; the artists instead revel in the reward of hard work, forged friendships, freedom of artistic expression and the satisfaction of long hours of preparation that lead to the event.

EVENT OVERVIEW: The Paul Mitchell American Freeski Tour provides skiers with an opportunity to compete in nationally televised Superpipe and Slopestyle competitions. Currently one of the top freeski tours in the nation, this event promises to attract some big names and even bigger prizes. Witness the best of new-school skiing at the American Freeski Tour!

REGISTRATION: Register online at americanfreeski.com before the competition. Credentials pick up at Gray Media trailer next to the Bergenhof Friday Feb 3-5..


OPEN TO PUBLIC: Spectators are welcome to view the Super pipe competition from the pipe decks and from the base of the pipe. You can access the pipe by walking up from the base of Peak 8. The Slopestyle event is best viewed from the top of the freeway terrain park, just off of Four O’Clock Run.
Posted by Nancy Yearout at 11:08 AM No comments:

Development of a second phase of affordable housing in the Wellington Neighborhood remains on track for an April 1 groundbreaking, as applicant David O'Neil and the town council worked out the last remaining details of an annexation agreement last week.

The deal outlines who will pay for sidewalks in and around the neighborhood, addressing critical pedestrian safety and access issues in the entire French Gulch residential corridor.

Along with the town, O'Neil committed additional financial resources toward the improvements, and also agreed to deed several acres to the town for a potential daycare facility. The exact daycare location is still up in the air, pending final development plans and discussions with neighborhood residents.

The town will provide cash up-front to enable the work to be done this summer, in conjunction with work on the new Wellington units. Nearby residents lobbied hard for the mitigation of existing traffic impacts as part of the approval, and town officials listened. O'Neil will repay his share as the first two filings for his project are approved.

Mayor Ernie Blake said he will take on the task of convincing county officials that they also need to be part of the equation.
Posted by Nancy Yearout at 10:19 AM No comments:

Real estate brokers from around the Rocky Mountain Region gathered at Keystone Friday to compare notes on real estate trends around the region.

All agreed that certain unique attributes characterize mountain resort markets, setting them apart from other types of real estate markets.

Nearly all the speakers from the various resort areas agreed that inventory is tight, with the law of supply and demand keeping prices high.
Posted by Nancy Yearout at 12:02 PM No comments:

186 Inches of Snow Reported on the Mountain

Since October 1 the Breckenridge Ski area has received 186 inches of snow (as of yesterday).

In town it's the first time since the 1995-1996 winter with four straight months of above-average precipitation, said Breckenridge weather watcher Rick Bly, referring to the current string of wetter-than-average months dating back to September.

Bly, who measures snow and rain totals for the National Weather Service, said he tallied 41.9 inches of snow for the month at his backyard gauge, a far cry from the record 149 inches in Dec. 1893, but 52 percent more than the long-term average of 21.9 inches.

December didn't bring anywhere near record snows, but if you take the 111 inches that fell in October, November and December, it adds up to the fourth-snowiest early winter ever, he said.

Bly said the snow-water equivalent (melted snow) at his station was also well above average for December at 3.16 inches, compared to 1.48 inches. This total bodes well for water storage and runoff in the Colorado mountains, where all the northern river basins have above-average snowpack.
Posted by Nancy Yearout at 9:54 AM No comments:

MTV to Film Concerts in Breckenridge

The concerts will be staged at the Riverwalk Center and tickets are free to the public. A limit of four tickets per person will be available beginning Friday, January 6th at the Breckenridge Activity Center at 137 S. Main Street beginning at 9:00AM or by calling 877-864-0868. Tickets can also be obtained through Breckenridge’s and MHD’s local and Denver-area promotional partners.

The “Music With Altitude” concerts will be directed by Alex Coletti and produced by Jen Jones. Coletti, producer of the Grammy-nominated “Unplugged: Alicia Keys,” has been at the helm of several MTV music franchises and recently entered into an expanded development deal with MTV Networks Music Group. Jeff Jacobs and Morgan Hertzan will serve as Executive Producers and Peter Baron is Executive in Charge.

“With the party atmosphere of Ullr Fest buzzing around Breckenridge and the snow-capped Rocky Mountains providing a spectacular background, these concerts truly embrace what MHD is all about – combining great music, great visuals and high def in a way that only MTV Networks can do,” said Peter Baron, Executive in Charge of “Music With Altitude” and Vice President, Label Relations, MTV/MTV2. “The mix of artists on stage gives Ullr Fest visitors and MHD viewers a great blend of country, rock and pop, truly reflecting the MTV, VH1 and CMT heritage of our exciting new HDTV channel.”
Posted by Nancy Yearout at 3:04 PM No comments: