After passing an ordinance restricting residential development on Main Street and some surrounding areas, the Breckenridge Town Council is discussing similar restrictions for office space.

The concern is that offices on Main Street take spaces away from retail businesses, which council members said are the main tourist attraction for downtown.

Town Manager Tim Gagen said real estate offices - by far the most common office use on Main Street - account for about 20 percent of Main Street businesses. Many towns with a similar percentage in retail districts have imposed office development restrictions, he said, because some studies show that at that ratio the prevalence of offices starts to reduce pedestrian draw.

As with the residential ordinance, the council expressed support for a grandfather clause for any office space restriction to protect current businesses.

Recently retired realtor Bob Girvin, who owns an office building on Main Street, said he worries that some spaces will remain vacant if office space is restricted. He'd like to see the Town encourage retail instead of discouraging other uses.

I'm with you Bob, let's encourage retail instead of discouraging other uses.
Posted by Nancy Yearout at 12:38 PM No comments:

Aspens in their Autumn Glory 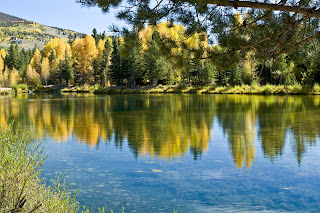 The Aspens are in their full Autumn Glory. Just look at the photograph Michael took yesterday near Silverthorne.
Posted by Nancy Yearout at 3:00 PM No comments:

Colorado’s favorite annual autumn show is getting good reviews even before it opens.

The aspen leaves are beginning to change color.

The late moisture we have received lately has delayed the change of colors and should make it a spectacular year, says Clare Sinacori, spokeswoman for Colorado State Parks.

But don’t get impatient. “We are pretty darn green, still,” Kyle Patterson of Rocky Mountain National Park told the Greeley Tribune. “There is a little tiny bit of color changing at higher elevations, but it’s not really noticeable yet.”

Next week should be the start of the good viewing with the peak following closely thereafter.

That’s of course if wind doesn’t blown them off, or snow cover them.
The photograph above was taken last year by Michael.
Posted by Nancy Yearout at 10:26 AM No comments:

The Breckenridge Town Council continued it's support for more quality childcare options in the town when it approved a grant to aid Breckenridge Montessori at a recent council meeting.

The grant gives the chlidcare provider $32,000 to pay off its mortgage debts and more than $40,000 for salary supplements and scholarships in 2007.

Breckenridge events and communication manager Kim DiLallo said the grants fulfill the Town's goals to encourage quality, affordable childcare in the community.
Posted by Nancy Yearout at 12:35 PM No comments: