Breckenridge Gondola to Operate this Summer

On May 1, chairs from the Arapahoe Basin Exhibition Lift will go on sale, as the ski area prepares to replace it with a detatchable quad.


The Exhibition triple chairlift has been turning since 1978, and it moves more people around the ski area than any other lift each ski seaon. Of the lift's 118 chairs, 110 will be available for purchase on a first-come, first-served basis for $450 apiece. Local nonprofits will use the remaining chairs for fundraising purposes.

“The Exhibition lift is a great lift with few maintenance issues, but now is the time to replace it,” A-Basin chief operations officer Alan Henceroth said. “The new lift will have increased capacity, shorter ride time and easier loading. It will provide rapid, easy access to the upper mountain, Montezuma Bowl, and Black Mountain Lodge.”

The new lift, dubbed Black Mountain Express, will have a capacity of 2,000 people per hour, a length of 2,877 feet and a vertical rise of 719 feet. Ride time from the base area to mid-mountain will be just shorter than three minutes — half the time of a ride up Exhibition. Construction is scheduled to beging around mid-June and will not impact the current season's closing date, tentatively scheduled for June 6.

A pick-up truck or similar vehicle is recommended to transport the chairs. Arapahoe Basin will not take reservations in advance for the purchase of the chairs. All sales are final, and chairs should be used at the purchasers' own risk.
Posted by Nancy Yearout at 10:02 AM

Copper Mountain announced plans recently to ramp up snowmaking for the 2010-2011 season as part of $6 million in capital improvements to the resort.


With the planned snowmaking increases, Copper anticipates better early-season coverage for race camps, training, and recreational skiers and riders. The planned 25 percent increase in snowmaking capacity will be spread throughout the mountain, with new systems planned for the Timberline area, adding significant intermediate terrain.

The resort also plans to expand its free Corn lot, increasing free parking at Copper by 40 percent. And additional parking in Union Creek will add easier access to Copper's beginner area, including Ski and Ride School programs and The Schoolhouse.

The improvements won't end in 2011, according to Copper Mountain President and General Manager Gary Rodgers.

“The focus on infrastructure enhancements sets the stage for future on mountain improvements,” Rodgers said.

The announcement was the first of its kind from Copper Mountain's new owner, Powdr Corp, which purchased the resort last December from Intrawest.
Posted by Nancy Yearout at 4:31 PM


As cuts were made across town budget last year to cope with the economic recession, the town's subsidy of Nordic center operations dropped from $170,000 to $80,000.

Hours, grooming and trail access were reduced, and nordic center revenue went from covering 50 percent of its operating costs to covering 68 percent of them.

With no suitable offers made by private entities to run the town, the center is expected to continue with this business model.

Town recreation director Lynn Zwaagstra said there were about 8,200 visits to the nordic center this season — with 3,400 from season passes and 4,800 from day-use passes.

Gagen said both the Breckenridge and Frisco Nordic centers, which involve private operation, drew more visits. He added that it “doesn't pencil” for a private operator to operate Gold Run.

Councilman Mark Burke, who owns the adjacent Clubhouse Restaurant, said of the existing Gold Run Nordic Center staff: “They've done a phenomenal job. I vote to keep it as it's going.”

Councilman Jeffrey Bergeron said he, too, is “comfortable” with the subsidy but would like to give the staff further flexibility as far as what terrain is available and how it's groomed.

“I'd like to give the nordic people a little bit more autonomy,” he said. “The experience I think has improved dramatically, but I think we can improve the ski experience.”

The Gold Run Nordic Center is open daily during the season, which ended April 4. It offers skiing and snowshoeing.

The center includes 22 kilometers of groomed classic and skate ski trails and more than 10 kilometers of snowshoe trails, according to www.townofbreckenridge.com.
Posted by Nancy Yearout at 6:27 PM


The town council Tuesday approved an update to the mountain pine-beetle ordinance that allows for deadline extension if the program's director determines the weather or “other unanticipated conditions or circumstances” make the deadline unresonable.

Property owners are responsible to pay for the inspection, mitigation and removal services involved with removing the trees. A class D permit is required to remove trees, unless a town-approved contractor is used.

For more information, call the town's community development department at (970) 453-3160, or visit www.townofbreckenridge.com and click on “Projects and Issues” then “2010 Forest Health Program.” A list of approved contractors is available on the website.
Posted by Nancy Yearout at 12:25 PM

Does Your IPhone Work on Weekends in Breckenridge?

I know a number of people with IPhones.  And I must say they are way "cool."  However, a real problem surfaced this winter in Breckenridge.  Do to the influx of visitors shooting video, snapping photos and emailing them to their friends every weekend, the system became so overloaded you could not make or receive a phone call.  My Blackberry did not have that problem.  So . . .

AT&T is working with the Town of Breckenridge to get a new, permanent tower set up to better accommodate mobile phone customers.


“We have a high sense of urgency in Breckenridge, and we're moving through as quickly as possible,” AT&T spokeswoman Brooke Burgess said.

“There are a lot of technical issues that go into deciding where is a good location for a tower, and AT&T is working on figuring out the best locations, and then will need to negotiate with property owners,” DiLallo said in an e-mail.
Posted by Nancy Yearout at 3:31 PM


The planning commission OK'd the development and preliminary plat applications — now the developer must get council approval regarding dedicating public areas to the town. Public park areas, roads and trail connections will be maintained by Frisco's public works department.

“This is going to be a great project,” said lead developer David O'Neil. “We feel really strongly about that.”

The new deed-restricted neighborhood is set to be built south of Main Street starting this spring on the 12.68-acre Peak One parcel, and the plan will include 70 units in a mix of duplexes and single-family homes. Originally, the developer had planned for 72 units, but due to outside input two residences were cut from the design.

The pending units will range from small cabins (around 800 square feet) to single-family homes up to about 2,000 square feet. The homes are being made available to people making between 80 percent and 160 percent of the area median income, or income ranging between $68,000-$136,000 for a family of four. Ten Mile Partners anticipates that construction to build-out will take at least five years.
Posted by Nancy Yearout at 3:03 PM

Frisco's wastewater treatment plant will get a $1.25 million upgrade this spring, including a new ultraviolet disinfection system. According to Butch Green, manager of the Frisco Sanitation District, the new system will use ultraviolet lights to remove 100 percent of the fecal coliform bacteria in the wastewater. Currently, the bacteria is removed with filters, which Green said are primarily designed to remove phosphorous. Increasingly, Green said, new regulations have ratcheted down the amount of the bacteria the plant is allowed to discharge into Dillon Reservoir.


“The machinery we've had for the past 20 years has just reached its limit,” Green said. Previously, the plant was allowed to discharge up to 12,000 parts per million of fecal coliform bacteria monthly, and that's been scaled down to a range of 143-258 ppm. With the new ultraviolet disinfection system, it'll no longer be an issue since the lights will zap all of the bacteria, Green said.

The UV system will cost the sanitation district about $600,000, but an Energy Mineral Impact Assistance Grant from the state of Colorado will take care of nearly $400,000 of that. The remaining cost will be covered by the district's reserve funds.

In addition to the new UV system, the district is using another chunk of reserve funding to replace two “equalization basins” at the facility. Green said these are the concrete dishes visible from Summit Boulevard that house large ponds of water for filtration.

“We didn't realize when we built them that junk flying around in the air collects on them,” Green said. “We even have skateboarders up there sometimes.”

The new basins won't be exposed to sunlight as the present ones are, eliminating another problem Green said they've had with algae growth. The basin replacement will cost another $650,000, bringing the total of the upgrades to $1.25 million.
Posted by Nancy Yearout at 3:38 PM 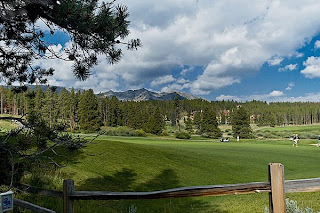 Click this link for a virtual tour and full information
Posted by Nancy Yearout at 4:19 PM

Take a look at the property by clicking the link below:

336 North Fuller Placer Road
Posted by Nancy Yearout at 11:39 AM

Video of my newest listing in Breckenridge:

Villas at Swans Nest
Posted by Nancy Yearout at 4:25 PM

An $18 million renovation of the Village at Breckenridge is set to begin April 5.

The five buildings at the base of Peak 9 are to be improved with new roofs, decks, windows, doors, siding and railings, according to a press release from Tony Wait, general manager with the Village homeowner's association.

Snowmelt systems and improved lighting are also to be among changes occurring by Dec. 15, when the project is expected to be completed.

“The project is funded by a special assessment of owners that ranges from $29,000 to $151,000 for residential units and up to $657,000 for the largest commercial unit,” Village association president Jeff Murrell said in the press release.

The Breckenridge Medical Clinic in the area is to close at the end of the current ski season and reopen for the 2010-11 ski season, according to the press release.

Access to the nearby chairlift and other Peak 9 amenities is to remain available with signage while the project is under way.

The Village HOA represents owners of 235 residential and 28 commercial units. Ground breaking on the project is scheduled for Monday at 4 p.m. at 535 South Park Avenue in the circle entry.
Posted by Nancy Yearout at 1:57 PM

Roughly 400 people from Summit County and beyond filled the Silverthorne Pavilion on Saturday to reflect on the life of Jay Bauer, a beloved Breckenridge attorney who died earlier this month.

“He always had something funny to say. It would make you laugh. It would also make you think,” former Frisco Mayor Bernie Zurbriggen said.

Rick Bly, a longtime friend and Breckenridge resident, served as master of ceremonies. He said Bauer — who died March 2 at age 65 — contacted him a few weeks earlier and suggested the memorial service begin and end with music and “maybe you should tell a joke.”

Bauer moved to Summit County in 1973, and established his law practice soon after that.

When it was discovered that he had cancer, doctors gave Bauer four months to live. He survived more than two years. During much of that time he was working in his law office or going on trips — often with his wife Joni, who lived with him in Dillon.
Posted by Nancy Yearout at 1:43 PM